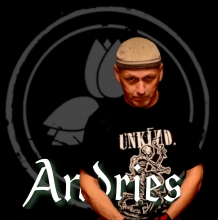 Andries or DutchIrishBastard since the days he was the Dutch guy in Mr. Irish Bastard — only picked up pumping the accordion in his mid-forties, after a severe illness made him rethink the priorities in life. Soon he found himself touring, sitting in, sonwriting and/or recording with MrIB, Mahones, Circle J, Sir Reg, Bastards on Parade, Greenland Whalefishers, Firkin and Ceili Family. In starting Bunch of Bastards, he is living the dream once again!